↓
Home→blog→Housing and wildlife, which matters most?

New housing can have a detrimental effect on local wildlife. For instance, the loss of natural wildlife corridors such as Cornish hedges can deprive wildlife of a safe passage between isolated patches of habitat. In this Parish wooded areas are fragmented so that species cannot move easily move around from one part to another and thus avoid inbreeding. Isolated areas have less resilience and so the species are at greater risk from factors such as extreme weather events.

Another example: street lighting and security lighting in new developments is often of high intensity and multi-directional. Bats become disorientated by such lighting, unable to follow their usual flight paths between roosting sites and feeding grounds. Invertebrates such as moths are attracted to bright lights which they confuse with the moon. They hurl themselves at the light source, burning up precious energy at a time when they should be feeding or hunting for a mate. 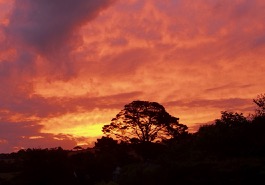 Increased road traffic results in more injuries to wildlife. Did you know that badgers follow traditional pathways which they hand down from generation to generation? When these are obstructed with new roads, we see more badgers dead by the roadside. Other species such as toads migrate along historic routes at different phases in their life cycle. Toads and frogs return to the ponds where they were born to breed. Increased traffic or new roads can vastly increase the death toll during their migrations.

Plants can be affected too. New householders often plant up their gardens with non-native species and these can spread to the local wild habitats. Non-native species often out-compete native plants and cross-pollination can result in changes to our wild species. Think of the Spanish bluebell which has crossed with the native bluebell to form a hybrid that has very different features and is now dominant in many areas.

With careful planning and awareness of the needs of our wildlife we can build housing that enables all species to live safely and enhance the local green environment. Does it matter to you that we take wildlife into account in new housing developments? Tell us what you would like to see.